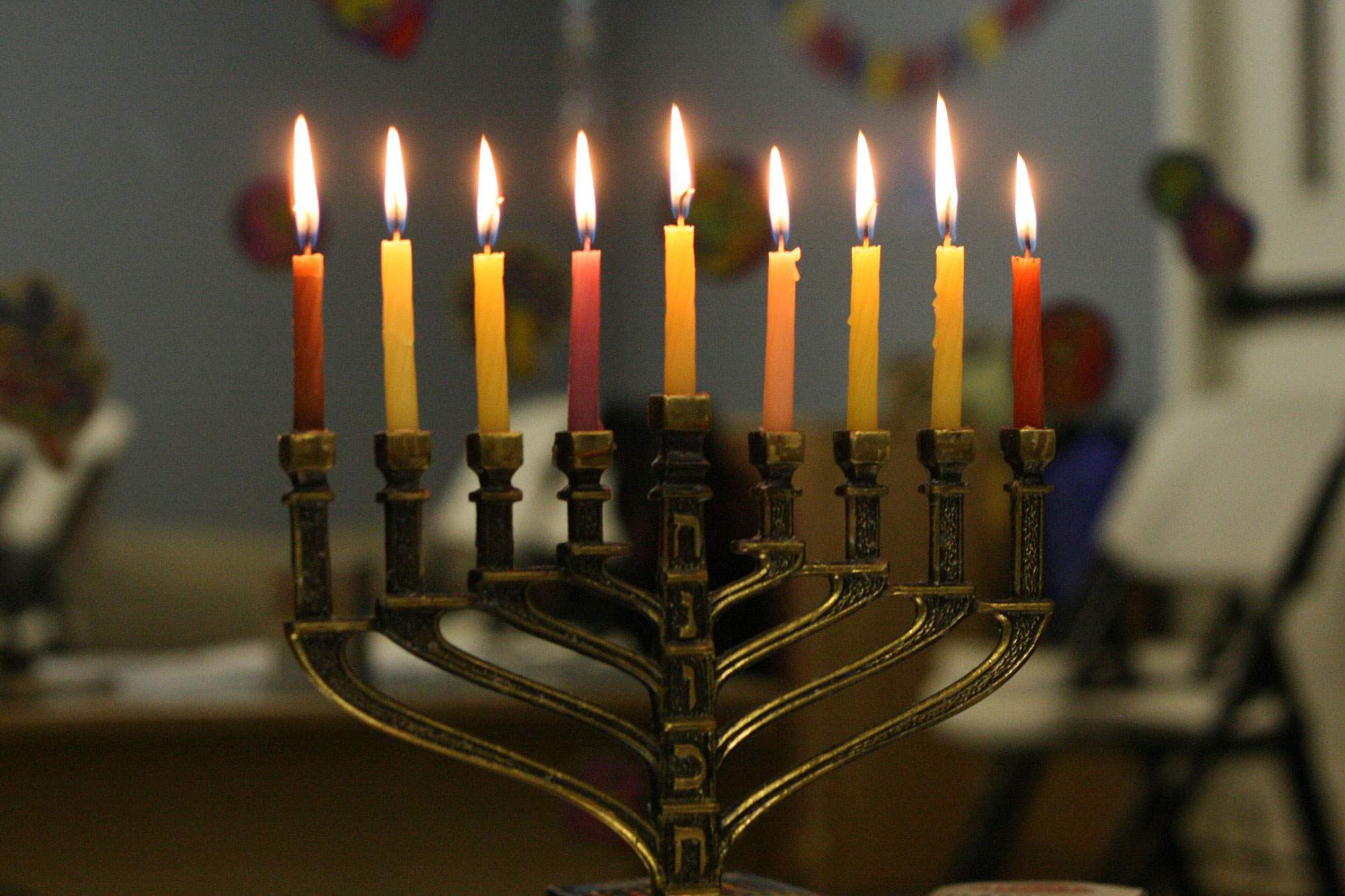 Chanukah, or the Festival of Rededication, celebrates the rededication of the Temple in Jerusalem after its defilement by the Syrian Greeks in 164 BCE. Although it is a late addition to the Jewish liturgical calendar, the eight-day festival of Hanukkah has become a beloved and joyous holiday. It is also known as the Festival of Lights and takes place in December, at the time of year when the days are shortest in the northern hemisphere.

Beginning in 167 BCE, the Jews of Judea rose up in revolt against the oppression of King Antiochus IV Epiphanes of the Seleucid Empire. The military leader of the first phase of the revolt was Judah the Maccabee, the eldest son of the priest Mattityahu (Mattathias). In the autumn of 164, Judah and his followers were able to capture the Temple in Jerusalem, which had been turned into a pagan shrine. They cleansed it and rededicated it to Israel’s God. This event was observed in an eight-day celebration, which was patterned on Sukkot, the autumn festival of huts. Much later rabbinic tradition ascribes the length of the festival to a miraculous cruse of oil that burned for eight days.

Much of the activity of Chanukah takes place at home. Central to the holiday is the lighting of the hanukkiah, an eight-branched candelabrum to which one candle is added on each day of the holiday until it is ablaze with light on the eighth day. (The Chanukiah is also referred to–erroneously–as a Chanukah menorah, but a true menorah has a total of only seven branches).

In commemoration of the legendary cruse of oil, it is traditional to eat foods fried in oil. The most familiar Chanukah foods are the European (Ashkenazi) potato pancakes, or latkes, and the Israeli favorite, jelly donuts, or sufganiyot. The tradition developed in Europe to give small amounts of money as well as nuts and raisins to children at this time. Under the influence of Christmas, which takes place around the same time of year, Chanukah has evolved into the central gift-giving holiday in the Jewish calendar in the Western world.

The defining act of Chanukah is to kindle the lights of the chanukiyah, the eight-branched candelabrum. These lights, which can either be candles or tiny oil cups with floating wicks, grow in strength during the eight days of Hanukkah, with the addition of one candle or lighted wick each night.

One light is added each night to fulfill the concept of lo moridim ba-kodesh (one does not decrease in holiness). Because the purpose of these Hanukkah lights is the public proclamation of the Hanukkah miracle, the chanukiyah is traditionally lit in a place where the candles can be seen from out of doors, near a window or a doorway. If, however, this public placement of the chanukiyah constitutes a danger, either from fire or anti-Semitism, the lights may be kindled elsewhere in the house.

Since the Chanukah lights fulfill a religious obligation, the rabbis forbade using them for any other purpose, even Torah study. Hence every chanukiyah has a ninth light, the shamash, or “helper,” whose purpose is to provide light and to kindle the other candles. The candles, lit after sunset, are traditionally supposed to burn at least one-half hour after nightfall. On Friday nights, the Hanukkah lights are kindled before the Shabbat candles. In some homes, the head of the household lights a single chanukiyah for the entire family, while in others, each member of the family lights his or her own chanukiyah.

Since Chanukah is not biblically ordained, the liturgy for the holiday is not well developed. It is actually a quite minor festival. However, it has become one of the most beloved of Jewish holidays. In an act of defiance against those in the past and in the present who would root out Jewish practice, the observance of Chanukah has assumed a visible community aspect. Jews will often gather for communal celebrations and public candle lighting. At such celebrations, Chanukah songs are sung and traditional games such as dreidel are played.

Like Pesach (Passover), Chanukah is a holiday that celebrates the liberation from oppression. It also provides a strong argument in favor of freedom of worship and religion. In spite of the human action that is commemorated, never far from the surface is the theology that the liberation was possible only thanks to the miraculous support of the Divine.

Both Ashkenazim (Jews of Eastern European descent) and Sephardim (Jews of Spanish or Mediterranean descent) recite two blessings each night, which affirm the commandment to kindle the Chanukah lights and recall the Chanukah miracle. An additional blessing said on the first night of most Jewish festivals, the Shehecheyanu, thanks God for enabling one to be alive for the celebration.

Following candle lighting, it is traditional to recite Haneirot Hallalu, verses stipulating that “these candles” are holy and one is not permitted to use them except to look at them. Ashkenazim continue by singing Maoz Tzur, a hymn that remembers different redemptions in Jewish history, whereas Sephardim recite Psalm 30, a psalm for the dedication of the Temple. During Chanukah, an additional prayer, Al Hanisim (“for the miracles”), which expresses thanks to God for the Jews’ miraculous deliverance, is added to the Birkat Hamazon (Grace after Meals) and the Amidah (standing or silent prayer).

Jewish law prohibits work for one hour after candle lighting. This time period is traditionally used for “family learning,” specifically to teach children about Chanukah through study and discussion. Families also use the period after candle lighting for games, singing, and gift-giving.

A favorite Chanukah activity is a gambling game played with a four-sided spinning top known in Yiddish as a dreidel (sevivon in Hebrew). Legend attributes this custom to Jews during the time of the Chanukah story who would grab a dreidel and start to play if Syrian soldiers entered the house during Torah study or prayer.

In truth, the custom is probably a much later one. In the Diaspora, four Hebrew letters–nun, gimel, heh, and shin–adorn the sides of the dreidel; they represent the words nes gadol hayah sham, meaning “a great miracle happened there.” In Israel, the last letter is changed to a peh, representing the word po, “here,” with the resulting declaration, “a great miracle happened here.”

Chanukah is also a time of joyous singing of traditional Ashkenazic and Sephardic songs, as well as more recent songs composed in the United States, Israel, and elsewhere. Some families enjoy decorating their homes for Chanukah.

With the proximity of Christmas, Chanukah has emerged in the United States as a central gift-giving time for Jews, although in Europe the tradition had been to give children only raisins, nuts, and small amounts of Chanukah gelt (“money”). Today some Jews advocate giving children gifts on Purim instead of Chanukah, because the scroll of Esther actually mandates that Purim be celebrated with mishloah manot, “the giving of gifts” (although these are traditionally gifts of food), and matanot l’evyonim “gifts for the poor.”