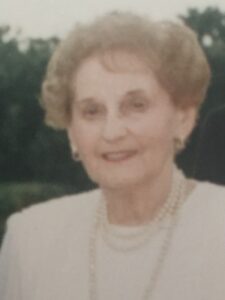 Ohav Shalom would like to thank Mort and Lynne Borzykowski and their family for their gracious donation to endow the Brenda Borzykowski Holocaust Remembrance Fund.  The fund is in memory of Mort’s mother Brenda, a Holocaust survivor.  The fund will provide support for Ohav’s youth in the area of Holocaust education and youth leadership. As a survivor, it was very important to her that the youth remember and learn about the Holocaust. It is for this reason that the family has chosen to use this fund to educate on the Holocaust as well as current moral and ethical issues and leadership for youth.

Brenda Borzykowski was born in Czestochowa, Poland, the youngest of six children.  Her Father sold baking supplies to support his family and was a very religious man. Growing up, she was devoted to her family and in particular her brothers and sisters. One of her brothers left before the war, eventually finding his way to America.  As a young woman, she worked in an English speaking office, where she was able to learn the language.

At the start of the war, her town was one of the first attacked by the Germans. Her parents were killed immediately. The family that she so loved was separated as they escaped or were sent to concentration camps. Her married sister, brother-in-law and their child escaped through Russia and went in hiding.  One brother was sent to the camps and killed, and another brother survived Dachau. Brenda was sent to live in a ghetto and work in a factory. In the ghetto she hid her sister and two other small children while she worked. One day she was taken directly from the factory to Bergen Belsen concentration camp. As she was leaving, she saw the ghetto being burned to the ground, killing her sister and the other children. In the camp, by sheer will and luck, she escaped numerous attempts by the Germans to kill off all the prisoners. She was liberated in 1945 by the British.

After the war, her surviving sister introduced Brenda to Stanley, a man from their hometown. The couple were soon married and later emigrated to America being sponsored by her brother. A year after arriving, she realized she had gained weight but thought nothing of it as she had been told she could not bear children. Upon consultation with the doctor, she learned she was in her seventh month of pregnancy. Brenda and Stanley were shocked and overjoyed.

Life in America was not easy for the new family. Stanley often worked three jobs to support the family. Brenda was a loving and devoted mother to her son, Mort. It was with great excitement that she welcomed her daughter-in-law, Lynne, and soon three grandsons. She was a devoted grandmother.  She enjoyed weekly Sunday dinners at the favorite diner and the ability to spend quality time with family until her passing.

As one of only 52 survivors in her section, she was extremely proud of the family she helped to create, three grandsons and their incredible wives along with seven beautiful great grandchildren. As the family of such a special woman, the Borzykowski family would like to honor her along with persecuted people everywhere and to assist in educating for a better future.

If you would like to donate to this fund and help support our youth, please click on the button below to make a tribute donation and choose The Brenda Borzykowski Holocaust Remembrance Fund.  Your donation will be used to help support leadership opportunities along with education on the Holocaust and moral and ethical issues for youth. Thank you.